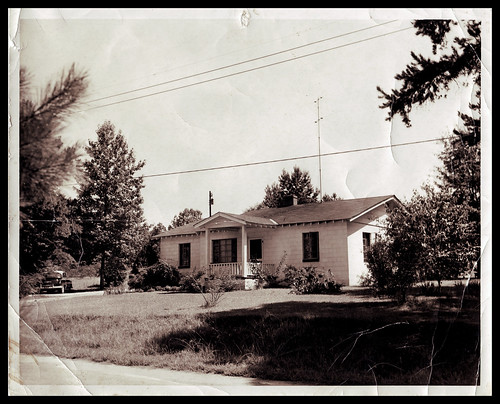 When I was a kid, my brother and I spent a lot of time at my grandparents' house on Springtree Road. Built in the 1950s, they were the first house in the neighborhood, built on the corner lot. Originally, the house was made of cinderblock, but by the time I got there, it had been bricked up. I have a picture of the cinderblock house around here somewhere, if I can find it, I'm going to scan it. Maybe I'll do something fun with it for my mom and my brother. (UPDATED: Found it!)

How can I describe the wonderfulness of that house in a short post that I'm really only writing in order to just get something up ASAP? I'll try just one scene from my childhood.

As long as we stayed in the yard, we were pretty much free to roam around with no supervision. Not that it was a giant yard, but it was big enough. The front of the house has a small porch and on one side of the porch was a crab apple tree and some bushes. I liked hiding in the tree. I liked hiding behind the bushes, especially when it rained. Because even though the rest of the yard had regular Georgia dirt, this space right here had very fine dirt. With little, tiny pebbles. And the windows had awnings (those are gone now), white metal awnings with red stripes and trim. When it rained, the water dripped from the awning over my grandmother's bedroom window to this soft, sandy dirt and washed the little pebbles so they sparkled. Lots of mica in the sand. Moss grew there as well. So I'd sit on the moss, covered from the rain by the awning, and sift the dirt and pebbles with my hands while a tiny puddle formed from the rain. It seemed very clean to me, very serene.

As an adult, the majority of my dreams take place or somehow magically end up at my grandparents' house. They have for years. My brother reports the same. Occasionally, I will dream that I've come to visit. My grandfather is usually stuck in some pattern of wandering around the house, looking for something to fix. I'll give him a hug. My grandmother will be frying chicken and making "chicken bread" and I'll hug her too. "R. will be over soon - I can't wait for you to meet him," I'll say to my grandmother. I can't wait for her to see V., the great grandchild she never met. How they would love one another!

When I wake up I'm always disappointed. R. and V. never show, my grandparents are just figments. It felt like I hugged them, touched my grandmother's fine, dyed-black hair, opened the kitchen curtains for her, but I didn't. My daughter has plenty of grandparents, but none like mine. Times are different now. Grandparents are younger, even if they really aren't. My mom blogs like crazy - my grandmother wouldn't have given you a hill of beans for a computer.

I can't tell you how wonderful it is to hear your voice here. I always knew you were a wonderful writer, and now I'll have the pleasure of reading your words. This is a beautiful image of your childhood and heartbreaking too. How many of us have a place in our past that we long for? That is gone yet so alive within us. Thanks for sharing.

I come your way via Shelli, and how grateful I am that she has introduced me to your magical words!

This is a lovely memory... thank you for sharing.

Shelli sent me here and I'm so glad she did. I've read your entire blog and want to read it again. May you just once dream of your grandmother and have V show up before you wake.

This brings back so many memories I have with my brother at my Grandma's house too. I hope your dream comes.

What a great story! I love dreams. Now your title make total sense.

There are so many places that I wish I could re visit in real life, let alone in my dreams.

It's so neat to read this for the first time today. I have wonderful memories of mica too (from a family house in Montreat).

What a beautiful story, and so thoughtfully written! Thank you for sharing your blog via the fish bowl!