As wonderful as the weather was just a few days ago, now it's colder and wetter again - we even had a couple of snowflakes this morning. They just get lost on the wet ground, though, so it's no real reason for celebration. A week ago or so, our neighbors decided they'd had enough of the rains flooding their front porch. They said they have called the office repeatedly to come and do something about it, but nothing happened. So the two of them dug a trench along the walkway to the backyard. The complex management promised to come and fill the trench with gravel, but it's been a while and so far it's just a big, muddy mess.

I felt like I just had to get out of this little box yesterday, so I put V in the car and we drove to Lenoir City, TN. The downtown area seems to be smaller and not quite as cute as Maryville - but the houses right around the downtown area are not to be missed.

I had a hard time navigating the town at first. I didn't see any signs pointing to the downtown area, so I drove around a few winding country roads. 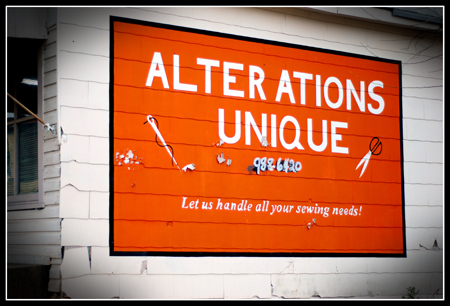 Eventually I found the downtown area, but I literally gasped when I saw all those beautiful houses up on the hill. So I turned beside this building first thing to get to the houses as quickly as I could. 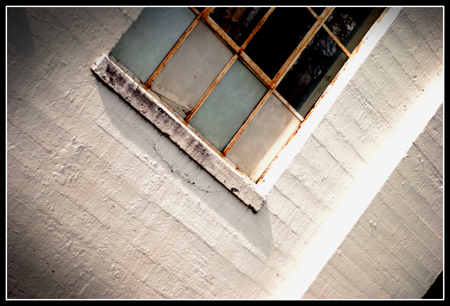 Back among the houses are several churches. This one appealed to me the most. I'm not sure I've ever seen a blue church, but it is just beautiful. 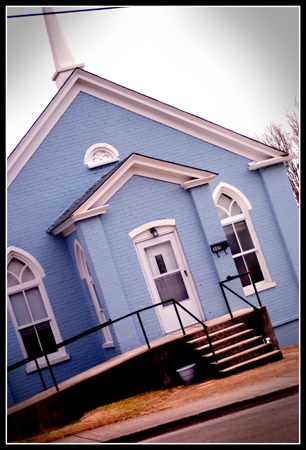 Here's a shot from downtown. This building is for rent. If it wouldn't be a complete waste of the agent's time, I'd call for a tour. The downtown area is very lively - not too much traffic, but definitely a vital community. I wish I'd known about it before we moved here; I would've worked really hard to find a rental house in Lenoir City instead of this tiny little box apartment in Knoxville (which we rented sight-unseen since we were moving from West Palm Beach, FL - a good 12+ hours away). 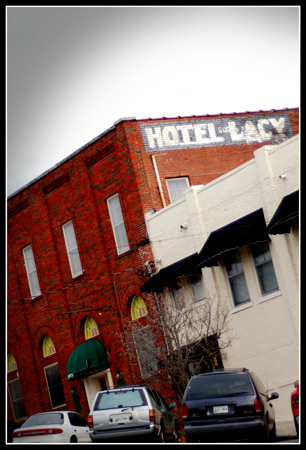 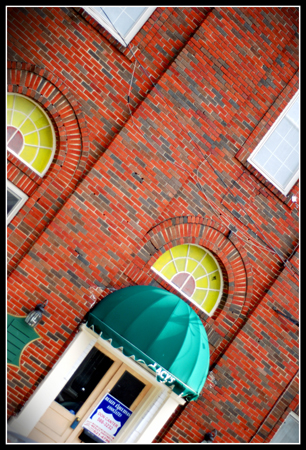 V was extra well behaved on this trip. We were gone more than two hours - I brought books, stuffed animals, goldfish and "miles" (what she calls those fruit juice gummy candy things in the shape of smiley faces from Wal-Mart). Worked like a bunch of well-planned charms. I just couldn't get enough of the houses.

Here's one more building from the downtown area - love the colors on the side of this building! 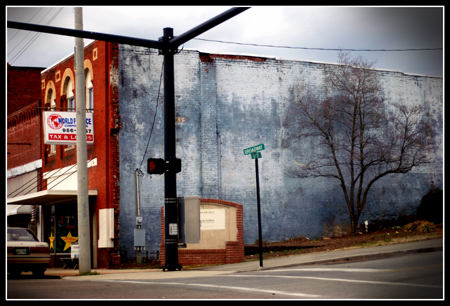 I'll have my favorite house pictures up on Friday, along with a lot of other photos on flickr.

The red/gray brick is amazing, just pops out at you. And I know I've never seen a blue church! Cool.

I understand your feeling to get out of the apartments. I hope we can get out this august since it didn't work out this month when our lease was up. Praying for God to lead ya'll to the right job.

Great pics. I also like the colors on the building. It looks like the tree is almost painted there on a cloudy day.

I agree with the previous visitor. The tree looks painted on the side of the building in the last photo. That's beautiful. You really are a good photographer.