Home Archives Profile Subscribe
...but they're not gray anymore
Waiting 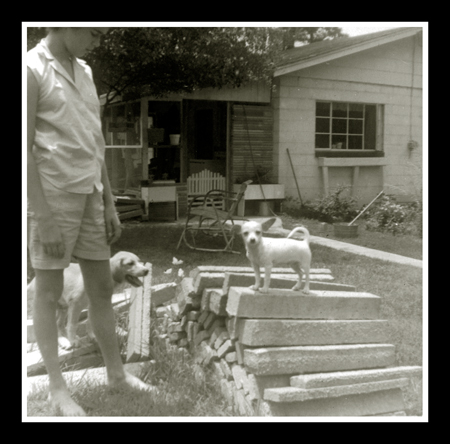 The photo above shows my grandparents' house in 1961. I don't know the girl in the picture, and I wasn't yet born. They've got the materials out to lay the border of the patio, the dogs keeping watch. The house hasn't been bricked up yet, there are no awnings. You can see some of that wonderful old metal lawn furniture. To the left of those chairs is where the spearmint will grow and to the right of the walkway will be the dogwood.

The patio—I can't think of a better word for it, though this is not what we called it. I'm not sure we called it anything other than "outside." It was a little area of brick my grandfather laid outside the back porch of their house that led to the driveway, a place to "set and stay a spell." Sounds simple enough, but it was easily one of my favorite places at the house. There was a 1-foot wall at the back of it, always with something planted there. Usually a small tree or a large bush and then other smaller plants around—marigolds were a favorite, impatiens, for several years he had heather. But there was always spearmint growing. I don't remember it ever being used for cooking or tea, but it always grew. I loved it. The great thing about it was that as kids, we could be pretty rough with it—pulling leaves to crush and smell, tromping through it—it was so very hearty. This is one of the things I will plant in my own yard, when I get one.

There was always a good place to sit on the patio—you know those old gliders? Granddaddy painted the furniture a different color every other year, usually green or red. Gliders are slow, relaxing, comforting to me. I'd sit on the glider with my grandfather, my feet hanging off, and he'd glide and we'd talk. I'd ask him questions, very often when will the watermelon be ripe, Granddaddy? I'd bring him a glass of sweet tea in the heat when he'd rest after cutting the lawn. It seemed like he was always lawnmowing.

On the opposite side of the spearmint was a dogwood and a holly tree (hated the holly—no fun with my perpetually bare feet). The dogwood was planted in a small bed. My grandfather raked the dirt around the tree daily, his own tiny Zen garden. Around the bed he placed the smooth river rocks he painted red and white. Whenever he would cut a low-growing branch off the tree, he would paint the wound white, sometimes with a smiley face in red.

I loved the bricks and how moss would grow in the rounds. I spent a lot of time pulling perfect circles of moss out and planting them in other spots in the yard where I would forget about them until they died of thirst a few days later. I remember spending afternoons laying down with my face on the patio, petting the moss in the hot summertime, hugging the cool brick.

(Aidan and I petted some moss today.)

I'm laying there with you, petting away. What a gorgeous post. I could definitely stay a spell.

Your grandparents sound so nice. I would love to have visited with them.