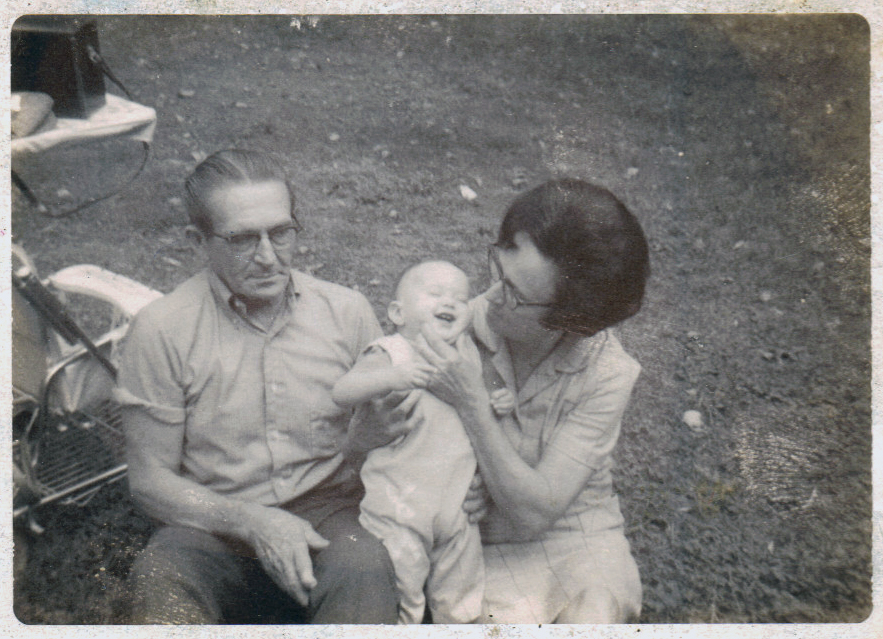 I'm thinking of my grandmother today. Why? I think because somewhere I saw a recipe for buttermilk pie and anything having to do with buttermilk reminds me of her. The smell of it transports me back to her kitchen immediately. I've never made a buttermilk pie before, but now you can bet I'm going to.

How I wish I knew more. How I wish I'd pried more stories out of her - pried any stories, really. She didn't talk much about the past and when she did, there weren't a lot of details.

My understanding of things is that her father was an alcoholic and that he and her mother divorced. And that her mother married another alcoholic. And so my grandmother left home at around age 16. I'd be afraid to ask how that happened.

She left school after sixth grade to work in order to help the family. I don't know what kind of job she had, but she ended up working at a mill. The story I remember her telling me of meeting my grandfather was that she had been out to the movies with some girlfriends and she met him in the street. I think they loved each other; it was hard for me to tell - until after my grandmother had passed away and then every time I saw my granddaddy he told me how long it had been since we'd lost her.

I think she had a lot of secrets. I know she knew a lot of sadness. She was a woman who was stuck in her life, who resigned herself to her lot. I think her biggest regret was her lack of education. She read a lot, though they were mainly bad romance novels. Maybe she just wanted to escape.

She sewed and cooked and cleaned her house. I remember her antique sewing machine that she actually used. Sometimes she'd let me push the pedal, telling me when to stop and start. I loved her pinking sheers too and I used to drive her crazy tangling her bobbins and spools of thread.

My grandmother is the one who always told me that you weren't finished washing dishes until you had wiped the counters and the table. Her house was never a mess. I should be so good at the housekeeping! She always kept a rag hanging and a damp paper towel (which she used again and again) on the countertop, ready to wipe down a mess.

My grandfather did the gardening, but my grandmother considered the flower bushes hers. She loved the camelias and the old fashioned roses and the gardenias - even though it was my grandfather who took care of them. She also worked hard in the kitchen, canning lots of the vegetables from the garden. Sometimes I wonder what she would think of all these blogs I like to read, like SouleMama, who appears to do things a lot like my grandmama would've.

Two of my favorite memories: Grandmama sitting on the sofa and me lying with my head in her lap. She'd brush my hair or just run her hand over my head. And then the time during and after my parents' divorce, when we lived with my grandparents for a long, long while. I slept in her bed with her and she'd let me drape my leg over her hip and sleep right up close to her. I really needed that feeling of security at that point in my life. Once I asked her if our sleeping arrangement bothered her and she said no, that we should keep sleeping like that. I can't thank her enough for that.

what a sweet memory...beautifully written.
it makes me wonder what memories my girls' will carry on into their adulthood about their amazing grandma.

what a lovely story. i too wonder what memories my kids will conjure up from their childhood. what will they love most?

Makes me miss my grandmother (s). Why are they so mysterious?

Makes me miss my grandmother (s). Why are they so mysterious?

This makes me think...what will my future children and grandchildren remember about me??

Buttermilk reminds me of my grandma too....

I love this photo! It makes me miss my grandma too.

I love this photo! It makes me miss my grandma too.

What great memories you have of her - even if you feel it isn't complete. Guess that's another reason we blog - we don't want our children & grandchildren not knowing who we were.
I love hearing old stories from my Granny. She has been through so much & is such a strong woman. I need to call her - thanks for the reminder!

Great Story. I love Buttermilk Pie! One of my favorites. It is easy and everywhere I have ever brought it, people love it.

Thanks to everyone for the kind comments. Comments like these make me very happy. :)

These memories of yours are my favorite of your posts. Just beautiful. There's so much I want to know about my grandmothers too. I do have some funny stories. But I know little of the heartache.