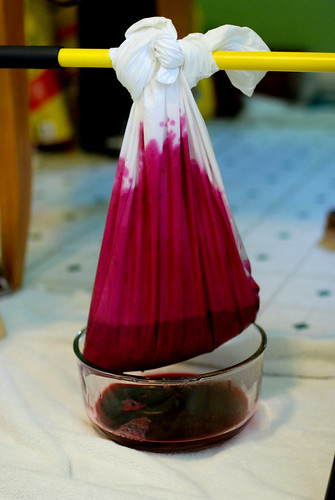 After draining the saft for two hours, it was ready to be reheated and sugared. I poured it into a medium saucepan with two cups of sugar and heated it on medium-low heat until the sugar was dissolved. That took about five minutes or so. 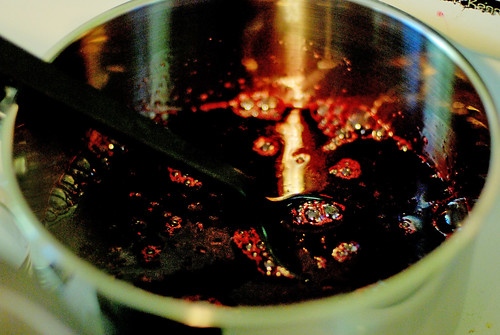 In the meantime, I washed my jars, and I had a total of 4 pots on my stove. For this recipe, I'm not sure that it was necessary for me to keep the jars very hot because, even once I dissolved the sugar, the berry mixture was not that hot. If you were canning jam, you would definitely want to have your jars in very hot water until time to put the jam in the jars so that the jars wouldn't break from the change in temperature. But I did it anyway, just for the practice of handling very hot jars.

Ok, so I had 4 pots going - one had the saft with the sugar dissolving, one was a big stockpot of water getting ready to boil for processing the cans, one had 4 jars being heated, and the last one had the bands for the jars which should not be heated as hot as the glass jars. The lids sat at room temperature. It took me about half an hour to figure out that, there being two parts to the lid, the flat part that sits on top of the jar is called the "lid" and the part that screws on to the jar is called the "band." Don't ask me why I was so confused, but I was, so I thought I'd pass that little tidbit on in case I'm not the only confused person out there.

Once the sugar was dissolved, I took the jars out of their hot water bath with my jar lifter and set them on a dishtowel. That part was a little awkward for me, but I got the hang of it eventually. I used the wide-mouthed funnel and a ladle to pour the saft into each jar. You have to fill the jar so that there is 1/4-inch room at the top, so it has to be pretty full. 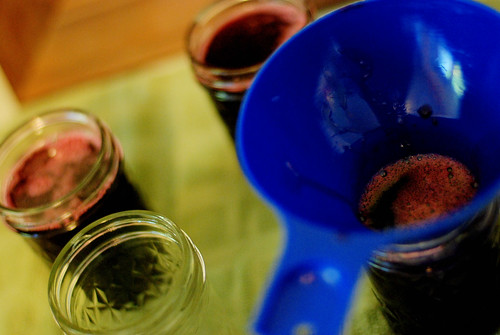 There was not enough to fill a fourth jar all the way, so I just used it right away. Of course I wanted to know what it tasted like so I wasn't exactly disappointed. If for some reason you think that you will use all the saft in the two weeks after you make it, you don't need to process your jars it at all. 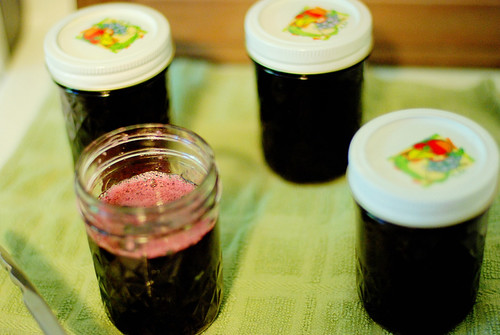 Next comes the processing! You are supposed to have a rack for the bottom of your canning pot, but I don't. You could also use a cake-cooling rack. I don't have one of those either. So I used a dishrag. Not the easiest thing to use, but it kept the jars off the bottom of the pot so they didn't get too hot or clunk around and break. 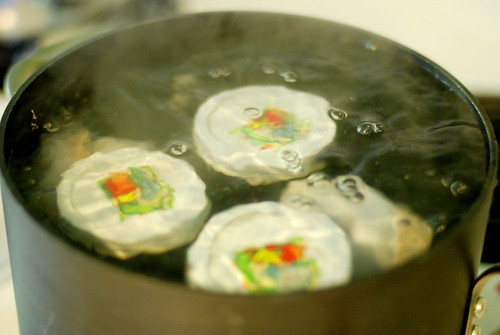 I let the 3 jars process for 10 minutes and made a small pitcher of saft from the fourth. 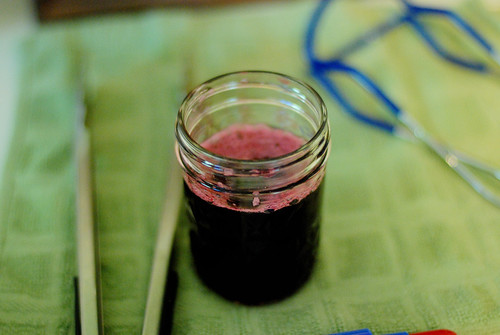 It's one part saft and 4 parts water. One small jar doesn't make a lot, about 32 ounces. It was just right for two adults and one kid for dinner. 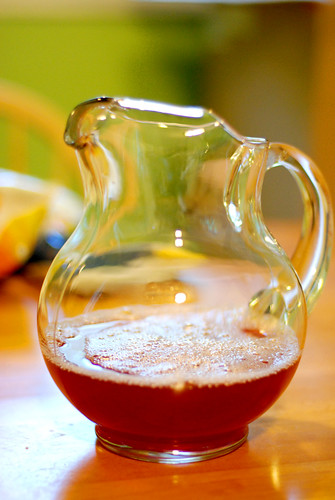 After 10 minutes, I used my jar lifter to take the jars out of their bath and set them back on the dishtowel. 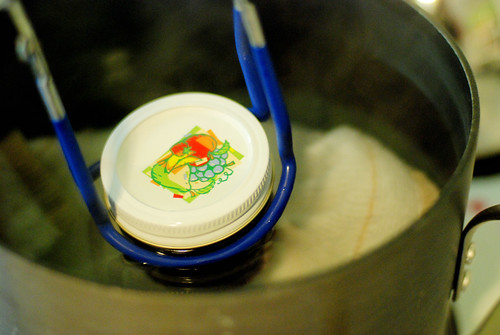 They should sit there undisturbed overnight to cool. 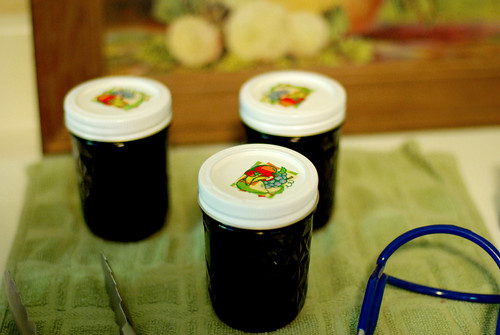 The next day, you should check to make sure that the seals took - all mine did. When you press down on the center of the lid it should not move; that's how you know it's sealed. If it isn't sealed, you can either process it again or just use it within two weeks.

So, what would I do differently? For one thing, I'd double the recipe and probably use bigger jars. I would use 5-6 pounds of fruit and just a bit less sugar. I know it's supposed to be sweet - and I like sweet things more than I should - I'd just like it a little less sweet. But not much. The most important thing is that next time I will not use plums. Don't get me wrong - this is good stuff, just as I made it. It's very light and refreshing. And the plums were very inexpensive. But the reason I wanted to make it with plums was to revisit my favorite childhood drink, and regular black plums from the grocery store do not make the cut. They're not tart or flavorful enough. If, one day, I can figure out what kind of tree my grandmother had and have one in my own yard, then I will make it with those plums and nothing else. But, while it smelled exactly like her plum juice when it was cooking, the final product didn't taste like it. Next time, I will try mainly strawberries, but also blueberries and whatever else is available. I might even try just strawberry and kiwi for fun.

I'm already planning to make it again soon. It's such a nice, light fruity drink. I really want to make enough jars to put away for the winter. Next year I might buy larger jars at the beginning of the summer, but this year we'll just have it as the occasional treat - which I think will make it extra special. I'd also like to try it with sparkling water - would be delicious!

This recipe would be a great first canning experience for an adult or older kid. You don't have to stress out about how hot you keep your jars, you don't use so much fruit that it would be a total waste of money if the jars didn't seal - you could easily drink it all in a couple of weeks. Also you don't have to worry about things like getting the bubbles out before you seal it or adding pectins, etc. After making saft just the one time, I feel like I could make jam successfully and am planning to do so next summer.

I hope you've enjoyed these posts (here's part 1, if you missed it). If you make saft - let me know! I'd love to hear what you think. 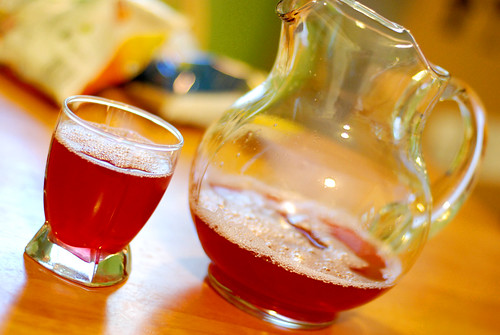 Saft
I got not quite 4 cups from this recipe, but it might be different if you used all berries. I used 2 pounds of plums and not quite 1 pound of blueberries and blackberries.

Combine the berries and water in a large stockpot and bring to a simmer over medium-high heat. Reduce heat to medium-low and simmer for 30 minutes.

Tie the pillowcase to a broomhandle suspended between two chairs over your large bowl. Let the berries drain for 1-2 hours. Do not squeeze the bag or the mixture will become cloudy.

Meanwhile prepare your canning water by bringing a large pot (at least 8 qt.) filled 3/4 of the way with water to a simmer. Wash your jars/bottles and lids and keep them in a hot water bath - hotter for the jars, not so hot for the bands, lids at room temp.

Transfer strained juice to a medium saucepan. Add your sugar and stir to dissolve over medium-low heat for about five minutes. Skim any froth or scum off the top.

Using a wide-mouthed funnel and a ladle, fill clean, hot jars with saft to 1/4 inch from the top. Add lids and bands - don't screw the bands on supertight, just tight. Place the filled and capped jars in the hot water bath using a jar lifter, making sure they are completely submerged. Bring the water back to a boil, if necessary, and then start your processing time - 10 minutes. Remove the jars and let cool overnight.

To serve, mix one part saft with 4 parts water.

Yum, yum, yum! Thanks for sharing the recipe!

Wow, I haven't checked your blog for a few days-you have been busy-shopping, photographing and canning! All looks great!

Maya, this looks like an awful lot of work, but I enjoyed watching YOU do it. -J :-)

Yes, you must have a lot of patience. That looks amazing. V didn't try to help? lol

Oh, that looks good! I'm going to make this with my children soon. Thanks so much!

Your grandmother probably used red plums. They are much more tart and almost make you pucker when you first bite into the skin. My grandfather used to have an orchard with reds, black, peaches and nectarines in Tx. Wewould make sorbet out of them.

My mom used to make Saft for my swedish dad out of blackberries. It was sooo delicious! You should give blackberries a try next time!