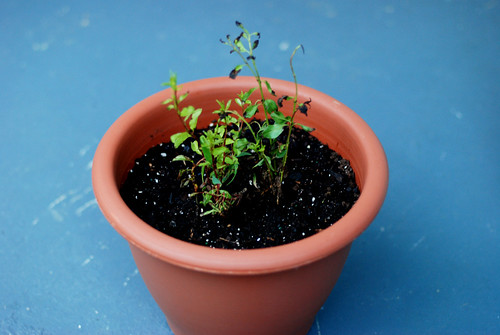 This is the tree that a kind reader, Kim, had her mom mail me after she read my posts on making saft. It's a wild plum tree. Kim says that her parents have two of these trees and more are always sprouting up in their yard so they usually just mow them down. Otherwise they'd soon have a wild plum orchard, I suppose.

It arrived Tuesday, I potted it Wednesday, and I can already tell that it's getting bigger. I'm sure it'll outgrow this little pot soon enough, but I plan to keep it potted until we buy a house next year. Then it'll go in the yard. I've already told V that this is Mama's Tree and that she is not to pull the leaves off. So far, so good. Ha ha. We'll see. She is a plant mangler extraordinaire.

Early this evening, I took a walk outside with my camera. While I was doing laundry today, I saw what appeared to be some new, very pretty white flowers blooming in the yard. But when I got there, they were just very, very tall dandelions. And the rain we had today made them decidedly less pretty then they might have been. But I found some other pretties around. 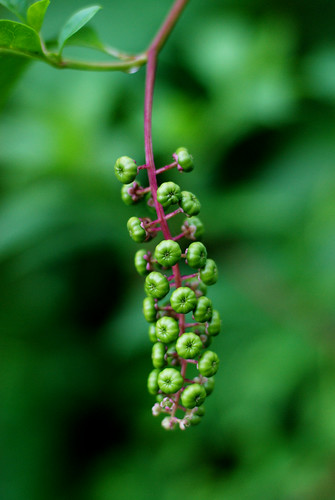 I don't know what these are, but I saw a doe in the backyard eating some just the other day. Haven't tried them myself, but they look tasty - visually, anyway. These are pokeweed! This video will tell you almost everything you need to know about poke salad (can't tell you how much I love this song. ah, good times.). The only other thing you need to know is that large parts of the plant are poisonous to eat, so proceed with caution. 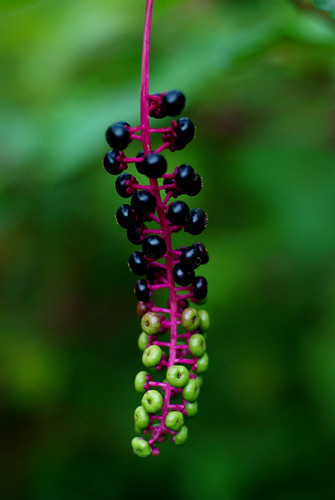 And this reminds me of an Eames print that I have and love, though my photo's not nearly so heavenly. I can't tell you how much I want a macro lens right now! 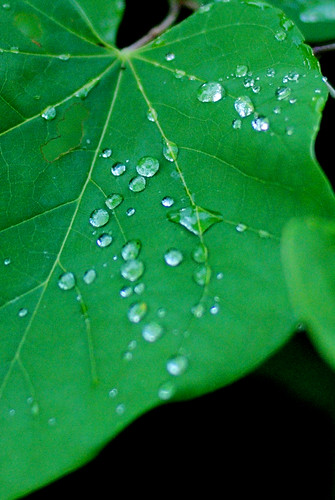 Why does the weekend always seem so short? It's halfway over already and there's still so much left to do!

I'm so interested to know what those funny little berries are, they are so photogenic!

I so enjoy reading about what's on your mind and soaking in your photographs. I look forward to each post.

POKEWEED! I've been wondering what those are! We have several growing in our yard!

I knew it was the Elvis video before I even clicked on it - we listened to it the other night. A loves Elvis!

i looove the green from ur camera :)Very pretty pics

Because you are so Brilliant I nominated you for a Brilliant Weblog award. Now you can link back to PepperPaints and nominate and link to 7 more blogs to give the award to. When the award button is up on my blog you can take it and put it on your blog. Thanks!

Your leaf photo is very similar to the ones I took in my yard. You can view them here:

Poke salad was one of those dishes that the poorest families in Appalachia used to eat - and you can see why, it's everywhere! My mom used to tell me stories of knowing people whose families subsisted on poke salad during harder times, even with the knowledge of its potential poisonous effects! But the berries are gorgeous, I always wanted to die fabric in them.

Pokeberry! Thanks for letting me know!!