Kind of a rainy, gray day, so what better way to pass the afternoon than to drive to a lovely little Southern town and take pictures? 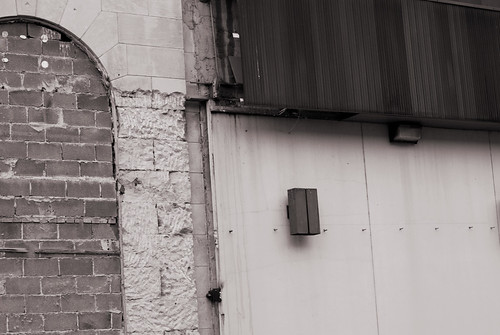 Ok, so that first picture might not strike you as lovely, but I have a thing for neglected buildings. 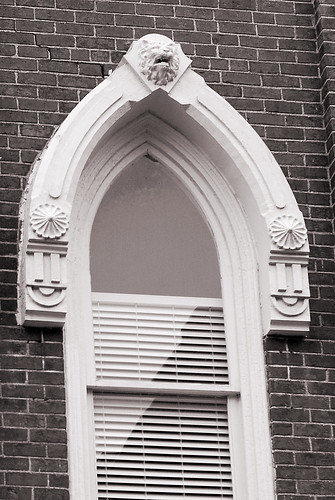 Oops, here comes another down-on-her-luck building. Sorry, I can't help it. I love buildings that make you wonder what possibly could've happened to them. This one is an old tobacco warehouse that was being renovated to be used as an antique car museum when there was a fire this past July. Heartbreaking. There were piles of bricks inside, and I hope that they can afford to rebuild what is left. 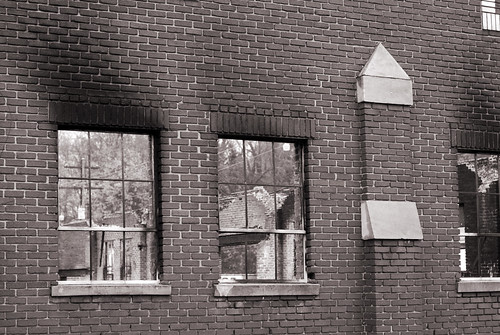 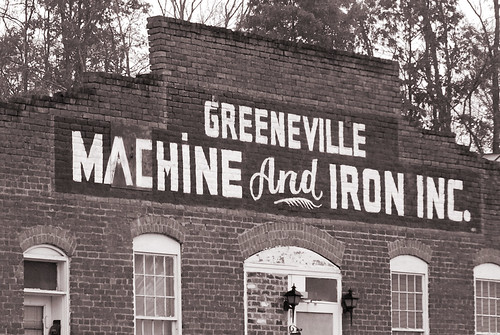 Davy Crockett was born in the area. 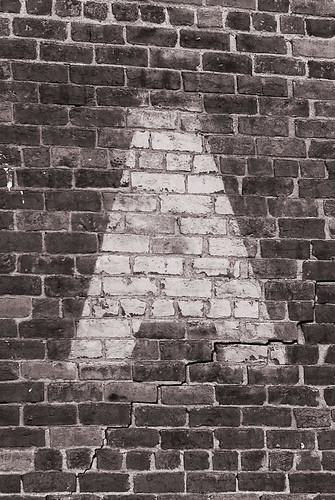 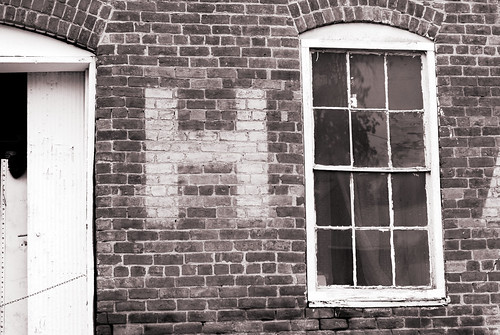 I loved this particular building lots and lots. I wish I could take pictures inside. 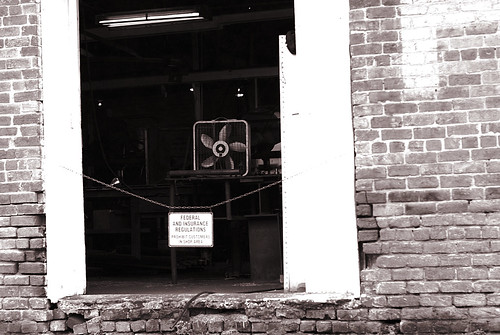 The sign above says, "FEDERAL AND INSURANCE REGULATIONS PROHIBIT CUSTOMERS IN SHOP AREA." Technically I'm not a customer, but I don't think that'd make a difference to the federal and insurance regulators. Drat. 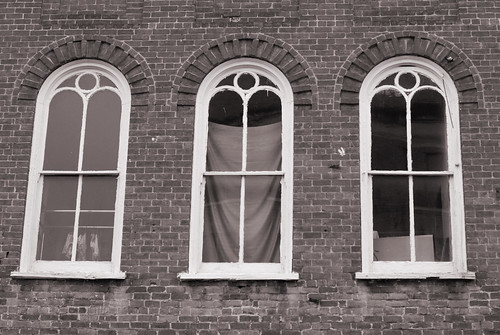 The one above is the second floor of a shop downtown. How much would I love to be able to go up there and take pictures? Very, very much. Once, when I was in college, the woman I worked for was looking to relocate her shop. She tried to rent one that used to be an old theater. She had me come with her to check out the space. It was awesome. Unfortunately, it didn't work out. The owner was an elderly woman who had a requirement that whoever rented it should be of a certain religion/ethnic heritage (I won't say which, but it might surprise you) and my boss didn't fit the bill. Weird.

Anyway. Speaking of old theaters, this is the Capitol Theatre. I'll have a photo of the marquee tomorrow. The website says that the theater is being forclosed (sigh), but from the sign below, it looks like they're trying to save it. I hope they're successful. 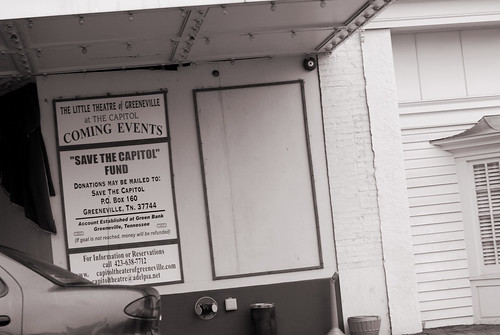 In part 2, I'll have some of the homes that surround the downtown Greeneville area. They're something else! And if you want to see more of the small towns I've been to in Tennessee, you can see my other small town excursions.

And remember, there's still plenty of time to join us if you'd like!

I have a thing about decaying old buildings too! It's like they seek me out and scream "SAVE ME!" I see the details that someone put so much time and effort into, and it just breaks my heart.

I love old buildings too. So much history and often, so much neglect. Each one tells a story, don't you think?

Thanks for the linky love! I am really enjoying this!

great old buildings. I really like the H. Thanks for the tour!

here's today's shot, I remembered the Shutter Sister post on self-portraits and thought I'd play around:

Nice! I love old buildings too as they have so much character in them. I really appriciate the write up you have done for each location as it really brings out the charm of the area. :)

Thanks for sharing these wonderful photos of the old buildings. hope they save the old theatre.
my daughter LOVEs to photograph the abandoned. so much so that I'm afraid she's going to get arrested for trespassing. I'll have to share some stories with you sometime. I'll try to write a blog on it after this festival is over.

these are so lovely. I want to drive through a small southern town so bad right now. Missing the east:) lovely pics! loving b/w november:)

It’s sad to see out building in a state of neglected but they do make a lovely photo subject and have heaps of character.
I have some new BW shots on my blog too.

oh the bricks and I relish your shots of the windows ~just the side "trip" I needed! I am listing my "to-do" list in black and white friday @ redorgray.com

I love small town trips! All that brick in black and white is beautiful. I have another black and white up today http://turkeycookies.blogspot.com/2008/11/2-4.html
Have a great Friday!

I was just in Greeneville the other day. I've lived here my whole life and had never really experienced it until then. It's a neat town. And I couldn't help but think that I wouldn't mind living there, not at all. Nice pictures, Maya!

I like old buildings, too. The buildings with the letters are interesting and I like the brickwork over the windows.

maya, I love your photos of the old buildings. They are so interesting and it's so sad when get torn down for something new. Can't wait to see tomorrow's photos!

I too love old building. Today I posted my favorite, old barn silos! You can see my post at
http://pixels-n-pen.blogspot.com
Jean

Oh Maya, those photos are spectacular. I love old mill and factory buildings. These may be my favorites of your photos to date. I've scrolled back up like 14 times to look at them again.

I love them all! Oh I wish I had had my camera when I lived on Chattooga Avenue!

I love the tone of these-more on the brown side.

Here's my Sunday b&w with a touch of sepia. http://dailyvignette.wordpress.com/2008/11/16/ignore-the-dust-please/