These are from my personal collection. I got these photos from a junk shop. They were from an estate sale of the gentleman that took the photos. From what I can tell, they were taken aboard the USS Intrepid.

The first photo is not dated. 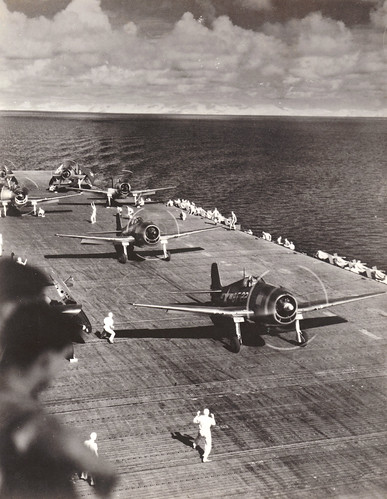 16 April: During an air raid, a Japanese aircraft dived into Intrepid's flight deck forcing the engine and part of her fuselage right on through, killing 8 men and wounding 21. In less than an hour the flaming gasoline had been extinguished, and only 3 hours after the crash, aircraft were again landing on the carrier. 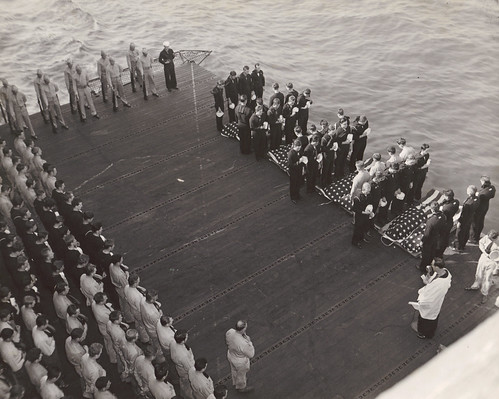 Thank you to all our veterans and your families for your time, for your bravery, for your sacrifices.

What powerful and appropriate photos on Veterans Day. Good post.

What a great piece of history you have here. The photos are magnificent and look to be in good condition.

thanks for this post ! my father was Army , the moms back home were amazing too! Great photos

perfect subject for today
I added a little bit of green to mine
http://pepperpaints.com/2008/11/11/black-and-white-and-green/

Very appropriate - what wonderful pieces of history you have there! My f-i-l was an air force mechanic during WWII. Maybe he kept the planes flying that landed there...

Thanks for sharing some of your collection in such a touching way! What fabulous photos!

Excellent post for Veterans Day. I like those photos. I've not given much thought to buying photos from a stranger's past, but they are certainly intriguing and invaluable. You are preserving a treasure from our collective history.

Wonderful photos and a really great post. Thank YOU.

wow! those are amazing photos...and what a great moment to have captured on film. where would we be without our cameras?!

What wonderful photos on Veterans' Day, an important piece of history.