It's been almost a year since our cat Wylie passed away. And more than a year since V started pretending that she is a cat every day. She's normally such a happy little girl.

But occasionally she'll tear up when she thinks of Wylie. Then, like a dummy, I played the song Senor El Gato for her from a CD that we have. She wanted to hear it over and again. 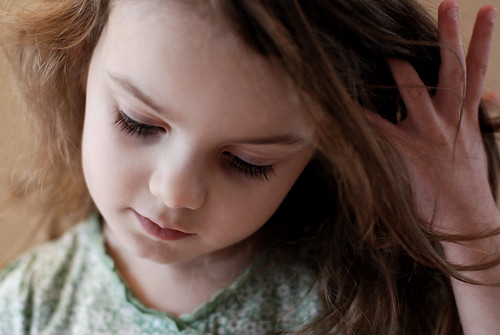 There's a part in the song where the cat dies, but then comes back to life because of the smell of fish in the air. It's a purposely sad song with an unrealistic happy ending. Wylie can't come back, and so this song makes her cry. At a mere 4 years old she tells me that she likes listening to the song because it reminds her of Wylie and makes her cry.

I don't know what to think about that. Part of me wants to tell her to stop it and forbid her from listening to the song if it's going to upset her. I feel like my child shouldn't have a care in the world for several more years to come. But a larger part of me thinks that it's better to feel your feelings fully than to stuff them away.

So I put a limit of twice on the song when she wanted to hear it this morning. I told her that missing Wylie hurts, but one day it won't hurt so much and the good memories would be stronger than the bad. I hugged her and let her cry. Then we played some happy music and sang along.

And now she's upstairs playing happily with her train set.

(And just for the record, I wasn't taking pictures of her while talking about Wylie - no no no - this was later and there are quite a few others in the set where she's smiling. I just like this shot.)

You are such a nice mama. V is very lucky to have you.

Awwww, I'm feeling for you and V today. I still have sad moments of missing our big dog Sam who died last fall. I think you're right, by the way, that is important to feel our feelings. I think it is also important to learn that what we think about impacts how we feel and it is important to know that you can do and think things that help you feel better. If V figures that out now she'll have about a 30 year head start on me. :)

That is sweet...it's good she can express her feelings openly though!

i like to listen to music that makes me sad sometimes too... maybe v is just destined to become a patty griffin fan.

and you're a very sweet mama...

Minnie our sleek dark calico has been gone almost 2 years. I miss her "burp-burp" type meow. Her scattering across the floor, and launching herself on the curtains (we called those episodes Vietnam flashbacks).

I let her out early in the a.m. on my birthday. She didn't come back. We looked for 3 days. One the 3rd day I spotted her by the side of the road 5 blocks from my house. J was in the car when I found her. I tucked her in the trunk without the little one seeing her. We were devastated for days...kind of in a way still are. Minnie slept on our pillows at night. A real snuggler, almost human cat. Her only fault? Didn't move fast enough when cars came along....

We adopted Purl from the Humane Society a year ago. She's just as lovable, though not the same. I miss Minnie probably as much as you miss your kitty.

It's so neat that you allow her space to explore her "negative" feelings. "THEY" say that people who have experienced death (of pets, etc) as children tend to deal better with it as adults (when it's parents and grandparents)

Her thoughts on why she likes the song remind me of when we as adults are in the mood to watch a movie we know is gonna be a tear jerker. There's just something cathartic in being able to wallow in a feeling for a while, and because you're watching/listening to something that someone ELSE went thru, you know you're not alone. Very cool that at such a young age, she GETS that.

I think handled V's feelings perfectly, maya. You let her feel sorrow and then gently guided her to move on to happier things.

She is so beyond her years, always has been. And you are such a sweet mama. It does get better, I promise. You know, I know!

I think it's wonderful that you allow her to express and explore her feelings. And the fact that she can recognize what causes those feelings and choosing to continue exploring them regardless is pretty amazing for someone her age. I think you did the right thing by letting her grieve, and understand that grieving is ok, but also helping her realize that life goes on.