I've discovered there are many things I can do with a baby strapped to my chest. I can mail packages of yarn (as long as it's just one or two), put away laundry (if I must), type a blog post (Holden says to tell you gaga goo goo!) as long as there's music playing (Fleetwood Mac's Rumours is his current favorite), put skeins of yarn into water to soak (this is getting trickier), and cook some things, though I don't like to chop veggies with him on me. Knife + baby = nervous mama.

But one thing I absolutely can't do with H in the Baby Bjorn is make a pretty chicken pot pie. 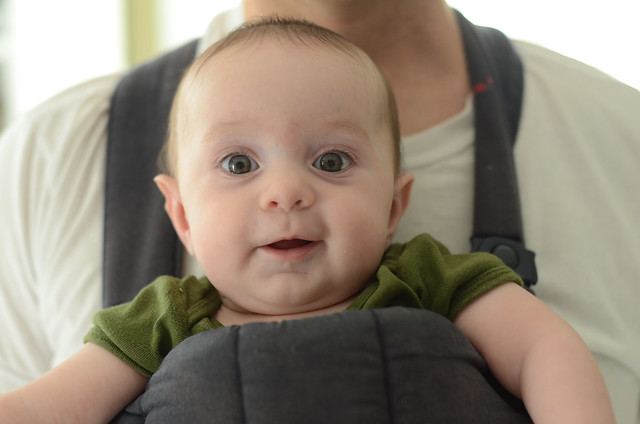 In recent episode of Wordgirl, The Butcher yells, "Chicken Pot POW!!!" while he hurls the pies at our heroes. That was a seed that grew in my family's mind, a desire for our own little chicken pot pow. When I found the recipe I wanted to use, all the reviews said to double the filling so it wouldn't be dry. So I did.

What I ended up with was enough for 2 pies because I had to use the deep dish frozen crusts since the store was out of the kind in a box that you roll out, which is what I had planned to use. The first pie was a wreck because I needed to get it in the oven during a time when my boy is really active and didn't want to be without me. I poured the filling in the pie pan and then flipped the other pie crust on top as best I could with a grabby baby wondering just what kind of interesting, good-smelling stuff this was!

I wanted to freeze the leftover filling for another time, but since there were potatoes in it, I was afraid they'd get yucky. So I made a second pie the next day. This time I had R here to hang out with Holden. I know I used to have a set of pretty leaf cookie cutters and have made at least one pie with a beautiful leaf-shaped crust. But they've been lost in one of our moves, so here's what I came up with. 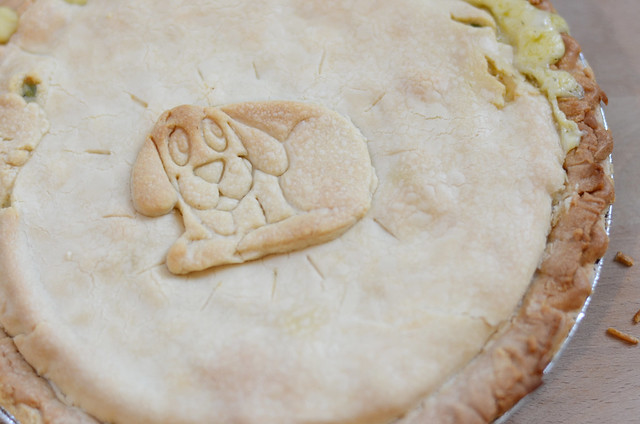 Happy October! It's the first - so that means there are 15 days until the November Yarn Club closes. So check it out if you want in!

~laffin'~ LOVE the Clifford pie! Bet it was tasty!

oohhh what's in the filling do tell!
Adorable picture of Holden!

Everyone looks good!! (That pie reminds me that it's time for lunch....too back I'm not having that pie!!) <3

Maya, Holden is a DARLING. Congrats a hundred times over. xo

Maya, Holden is such a cutie! I love your Clifford pie, too!

oh we love word girl over here too! your chicken pot pow!! looks fantastic!
(and man oh man is holden ever adorable!)